A few weeks ago I was having drinks with a few friends in El Zonte when someone brought up the fact that it was so hard to get the people from their “old world” like their parents and friends to understand the world we were living in that caused me to say the following.

I actually have a very different perspective on how I think about this.

When I was 16 I started to believe that I understood the world better than my parents and all the people around me.

…. *3 second pause for dramatic effect and for people to create an idea of what I’m going to say next*

By the time I turned 20 I realized I was right.

As most of the things that come out of my mouth these day it shocked everyone but made them laugh.

However hidden in the joke is an arrogance as well as cynicism (to some people) that sums up a lot of my recent conversations.

The meme below sums up the underlying idea of the journey I see a lot of people being on. 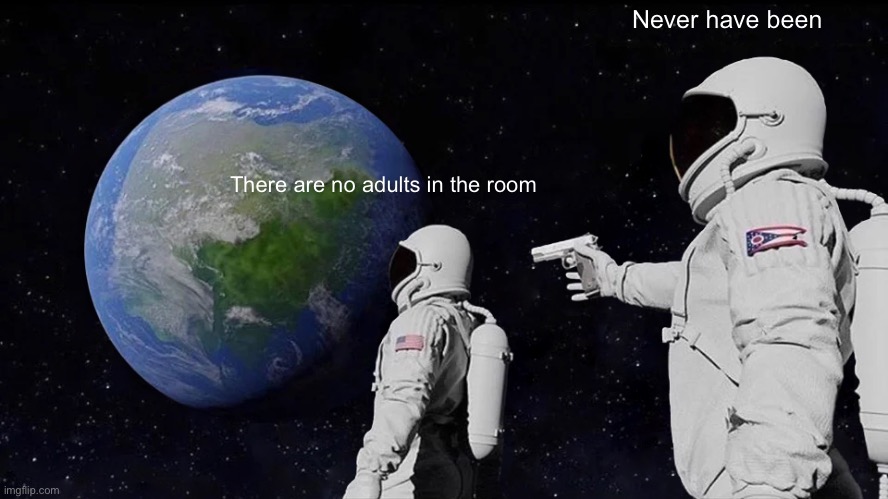 Whether it’s religion, Afghanistan, covid, Bitcoin, college etc etc everyone has their awakening where they first exposed to the idea that “the experts are/were wrong” and everyone tends to be shocked or surprised.

I rarely am. In fact I’m surprised if they’re right.

Simple, most people believe that there are adults in the room. I don’t.

Why we look for adults

If you go down the rabbit hole of how humans develop somewhere down there you will come across Jean Piaget and while I could talk about him for a long time there’s one aspect of how kids develop that I would like to highlight.

Kids use their mothers/caregiver’s emotional response to help understand the world.

What does that mean? Well in simple terms it means that a baby outsources if something is “safe” or “dangerous” to it’s mother.

Eg. When a baby meets a stranger, the baby looks to it’s mom to see if the mom reacts positively or negatively to the stranger and reacts based on the mom’s emotion.

Of course all this happens subconsciously. But what’s my point?

Well, why have humans evolved this behavior? Because babies can’t judge character or danger. They doesn’t have the frontal lobe development to think critically.

Yup of course you’re not, but the world is complicated and just as a baby outsources their emotional response to their parent. Everyone of us uses “society” to filter out bad information.

While a baby may outsource it’s emotions entirely, older “babies” aren’t that different just a lower percentage is outsourced.

Humans use each other to decide what to value and what’s true. Memetic desire is one simple example to illustrate this point. 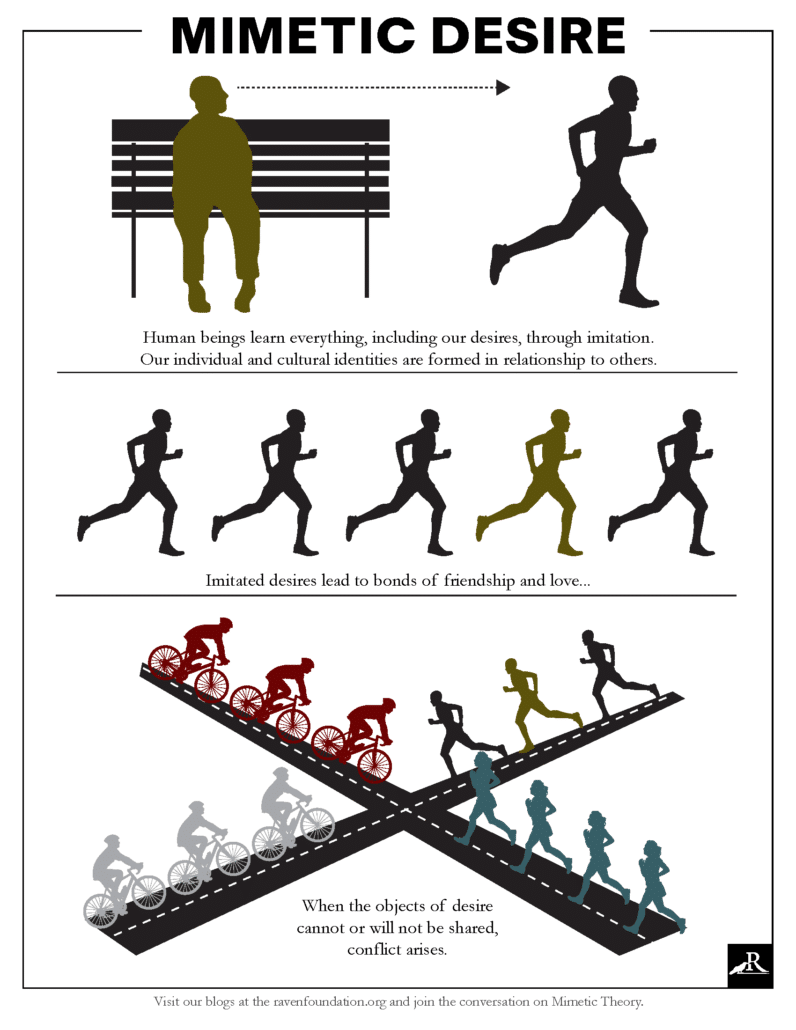 Coming back to the “adults in the room”

Just as a baby doesn’t pay attention to everyone’s emotions equally and instead filters down to it’s “caregiver” who’s usually the mom, similarly each one of us try and find the “adults in the room” cause it’s the most natural thing to do.

Well, most people woke up with a digital clock vs a physical alarm, fewer people in the western world worked in a factory and worked in an office. But for the most part 2000 was pretty similar to 1950.

Well, you have a phone for an alarm clock that also connects you to your friends around the world the first moment you wake up, work means opening a laptop maybe visiting the corner coffeeshop.

or as Balaji said, “instead of pressing the same button multiple times (factory work), it’s about pressing multiple buttons to produce something new (laptop work)”

In 2020 you’re best friends with people halfway around the world but you can’t recognize the person halfway across your apartment complex hall.

Cool I don’t think most people will disagree with me that the world is changing and that the change is accelerating.

Why is change relevant to this conversation?

When the world didn’t change a lot it was easier to not be wrong about the world. The mainstream view was the right view.

It wasn’t that hard to act like an adult in a slow changing world.

I’ll use Internet marketing to illustrate this point.

I’ll share something incredible that I noticed over the years working on the Internet and interacting with some of the top people in the Internet marketing space.

For starters this is a behavior that is most prevalent among people in their 30s and 40s who’ve had non-Internet jobs before they worked online.

A large majority of Internet marketing people have an subconscious fear that “this won’t last”. I don’t just mean freelancers in India writing online for the first time, I’ve seen this fear in people who work as consultants for companies like Nike and have been working online for over a decade.

What ends up being the end results behavior of this? They invest primarily in the “physical” traditional world. (Index funds and real estate, but especially real estate)

Part of the reason is that when you get to that level you probably feel like you’re too “out of the box” compared to the people not in your world another reason is that non of it feels “real”.

Most SEO’s who spend their time manipulating Google would fear investing in Google’s stock or an Internet startup.

What’s the point of this long winded illustration?

Well, people who are considered “cutting edge” compared to 99% of humans, the Internet marketing digital nomads who can travel the world working from their laptops are usually the worst people to talk to about cutting edge investing cause their decisions aren’t objective and are instead driven by fear.

So the Adults of online marketing are the babies of investing.

I noticed this in multiple aspects of my life over the years:

The Adults of Internet marketing were the babies of Crypto

The Adults of bitcoin were the babies of defi

Endless Examples. Again always exceptions of course but the above logic is true for most people.

“Kill your darlings” is a common piece of advice given by experienced writers. Similarly in life, kill the “adults”. Or more specifically compartmentalize them.

We live in a time of either “trust experts” vs “don’t trust any expert”. Neither make any sense if you spend a moment thinking about it.

But instead the logic I try to use is looking at people as experts on very very specific subjects and fools on everything else (until they prove me otherwise).

For example, why do I care what a heart surgeon thinks about the safety of traveling to Sudan. His opinion isn’t worth more than a child’s.

The above example might seem obvious but it’s exactly what people do in their daily life.

Bitcoin is the perfect example, almost 99% of mainstream articles and podcasts done about it are by people who’ve never done a single bitcoin transaction. So basically it’s nothing more than just a rambling of a child.

Cool noise ignore them, just like you would ignore a whining child.

In a industrial capitalist world being a polymath was a disadvantage cause you benefited from being a specialist, however in todays world the people who adapt most easily to change are polymaths.

Simple, while “they’re no adults in the room” there are “people who are adults on specific subjects”

But unless you’re someone who spends a lot of time going down a lot of rabbit holes and being a polymath how can you tell who’s an adult on a topic and who’s a child. You need to have basic understanding of the functioning of systems to them see if the experts are making sense.

Learning the basics on a wide range of topics helps you have a grasp on which adult is right on a topic and which one clearly has no idea what he is talking about.

So as a polymath you benefit from the existence of specialists without being one.

How do you become a polymath? Well tbh the only was I’ve seen that works is reading combined with just doing a lot of new things.

ps. I have a book list that I’m updating often

Most people are wasting time on arguments where there’s an objective right answer, so fuck their arguments and focus on learning what you don’t know yet.

After a couple of days in El Salvador when the bitcoin legal tender bill went into law I started feeling queasy because it just felt like all the bitcoin people were each repeating the same ideas to each other and talking about how the rest of the world doesn’t yet know.

But I actually pushed back on it, because else it’s looking at the world like there’s a destination “we’ve found the truth and now we can relax cause we know the truth” and I think I said the following

If we spend all our time talking about what we know that the rest of the world doesn’t yet know, we’ll never get around to figuring out what we don’t know yet.

I think it was influenced by Eric Weinstein telling Balaji on Episode 35 of the portal.

if we spend all our time talking about what “we’re not saying” we never have time to actually say what we’re trying to say. -Me paraphrasing Eric. 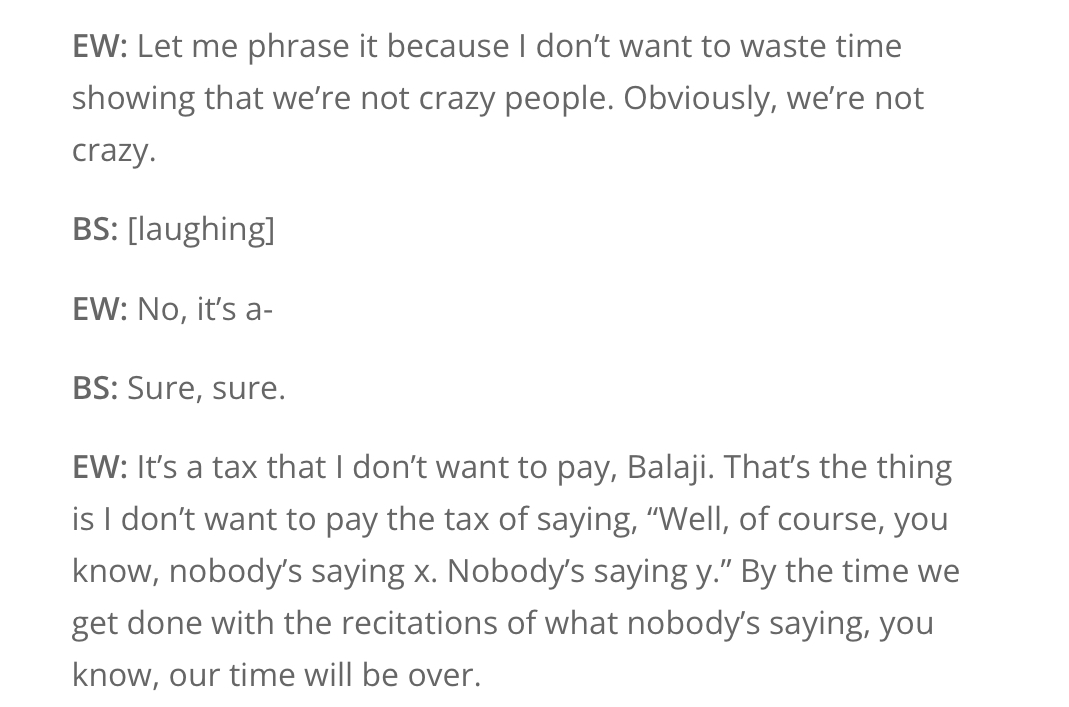 If you believe you’ve found the “truth” and you can stop searching basically you end up doing exactly what I described earlier with Internet marketers.