Sensational headlines have convinced the unsuspecting citizen that Bitcoin is incompatible with the environmentally conscious narrative. A look beyond first-order effects, however, reveals that Bitcoin may ironically be the key to a future of abundant, clean energy because it foundationally changes the energy industry’s incentive structure by acting as a market-aligned demand response capability and de facto insurance product.

What does this look like when you apply this to a single country? A small country that most people can’t point to on a map?

In this article I’m going to share the different ways Bitcoin mining can make an energy grid more efficient and incentive it’s growth by focusing on a country, Albania.

Albania is at the top of the list of countries that get their energy from hydroelectricity, most days it’s 100%. The only other large country on that list is Paraguay.

In Paraguay, bitcoin miners work with the dams, as well as tiny cities to reduce the cost of electricity for everyone else. That’s not yet the case in Albania.

How Does Bitcoin Mining Stabilize the grid?

Demand response programs create electricity buyers that are willing to reduce or altogether stop their power consumption at certain times to supply more energy to the grid. These programs help the grid better support peak demand periods by making it economical to produce more energy than is typically required during lower demand periods, since the miners can soak up the excess. 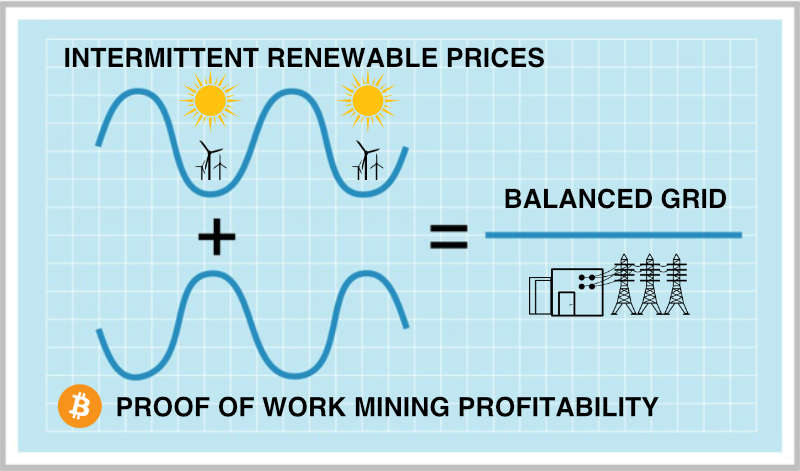 Miners are the ultimate demand response resource due to their location independence and ease of adjustment in power consumption (from 0 to 100% and vice versa in minutes).

According to Lorenc Gordani, an independent energy lawyer who consults with several companies in Albania:

“Government data shows the country has granted permits for another 1,785 MW of generation capacity, with those projects not yet developed. He said there is an estimate of additional “hydropower potential studied, still unexploited, at around 815 MW.”

Albania needs that energy production. It’s urbanizing quickly and as the economy grows there’s more demand. Currently only 0.35% of cars in Albania are electric despite the government’s incentives and moves towards electrification. Tirana started phasing in electric buses for public transportation in 2017 & the majority of new taxis and police vehicles are electric.

This is not even change that needs to be incentives, most people I’ve met in Tirana are looking to get an electric car mainly because it’s cheaper. Even before the current energy crisis it was cheaper to recharge an electric car than it is to go to the pump due to the relatively low energy cost.

In terms of infrastructure, Tirana’s electric car charging are a way to go to be considered on par with it’s EU counterparts, but for it’s size and development level I already consider it punching above it weight. 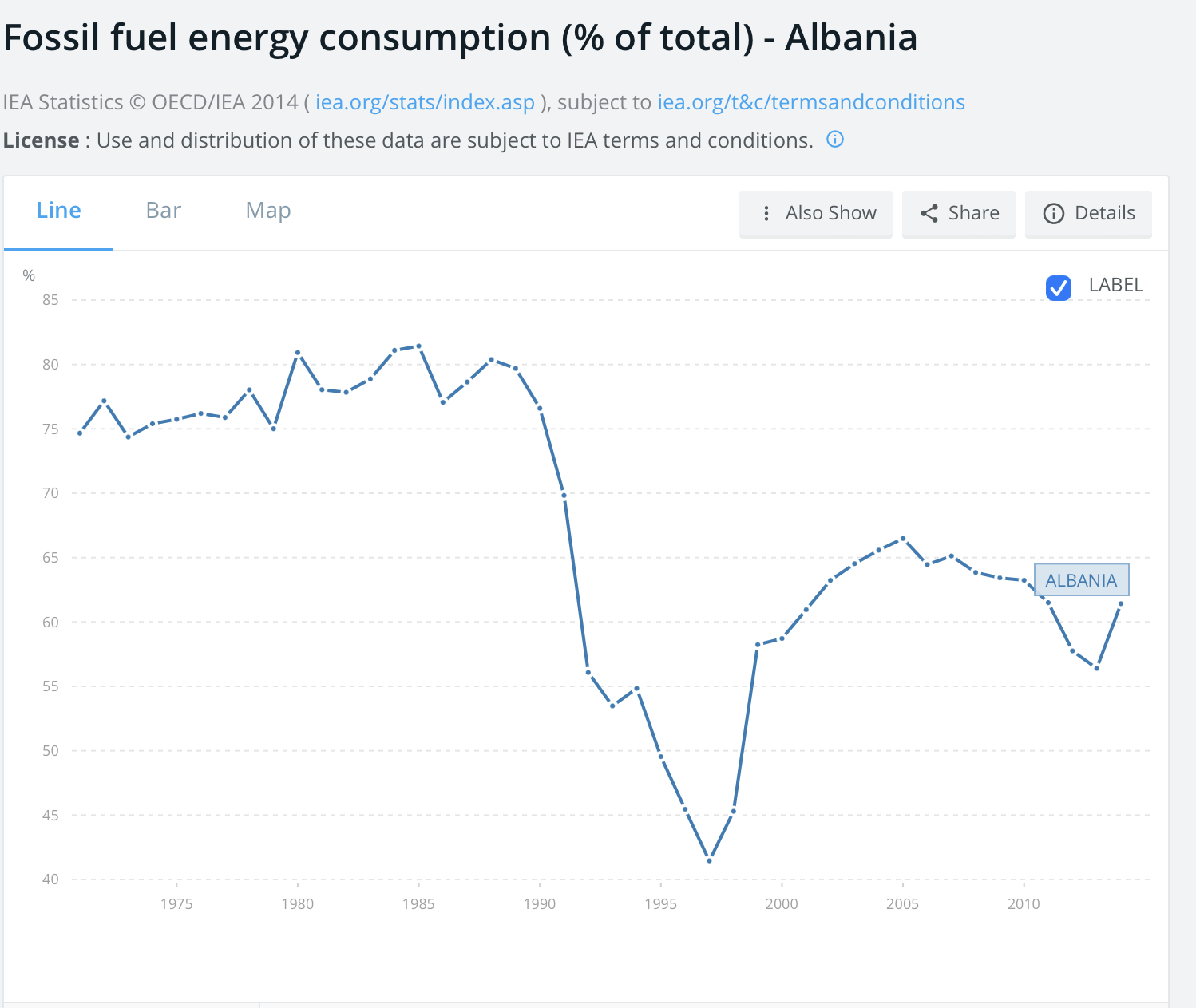 While hydro is 90+% of ‘electricity’ production, fossil fuels is 60% of ‘energy’ production.

In 2018, imports under chapter 27 reached almost $600 million, while exports amounted to $380 million. As electricity starts to reduce the dependence on oil, Albania can switch to being a net oil exporter that uses the money from selling oil to grow it’s local economy (similar to Norway)

Given just the switch to electric cars Albania needs to double the energy production, add in industrial and economical growth and Albania looking at multiples growth of it’s energy production.

Bitcoin mining incentivize and subsidies the development of the future hydroelectricity projects by being the buyer of first resort.

Bitcoin is a buyer of energy of first resort.

Albania currently has no wind power capacity, despite its vast potential. However, it launched a two-stage bidding process in mid-2021 for a total of 100 MW of onshore wind farms, and the initial quota might be increased to 150 MW.

Both of these projects cost a lot of money and in the short term will produce more energy than consumed. That’s where bitcoin mining comes in, bitcoin miners will pay the government for that energy. The projects can work together so that solar, wind farms can start selling energy from day 1 vs months later when they connect to the grid.

Bitcoin miners can come in, help incentive the development of new energy products, subsidize the cost by paying for the energy that would get wasted. Once there’s better use of the energy the bitcoin miner’s can just leave/move to a new project.

In Jan 2022 the Albanian government said that they want to turn on their oil/gas plant to fill in the demand gap caused by the energy crisis.

Reasons given for the call include needing more power for the public supply obligation, creating a reserve capacity to guarantee power supply security, complementing electricity generated by hydro and thermal resources, and creating surplus revenue.

This is where bitcoin can solve the issue without forcing the government to go back to burning fossil fuels. Just earlier this week Bitcoin Miners helped the Texas Grid deal with higher demand due to high temperatures.

“There are over 1,000 megawatts worth of Bitcoin mining load that responded to ERCOTs conservation request by turning off their machines to conserve energy for the grid.” Lee Bratcher, president of Texas Blockchain Council told Bloomberg in an email response. “This represents nearly all industrial scale Bitcoin mining load in Texas and allows for over 1% of total grid capacity to be pushed back onto the grid for retail and commercial use.” 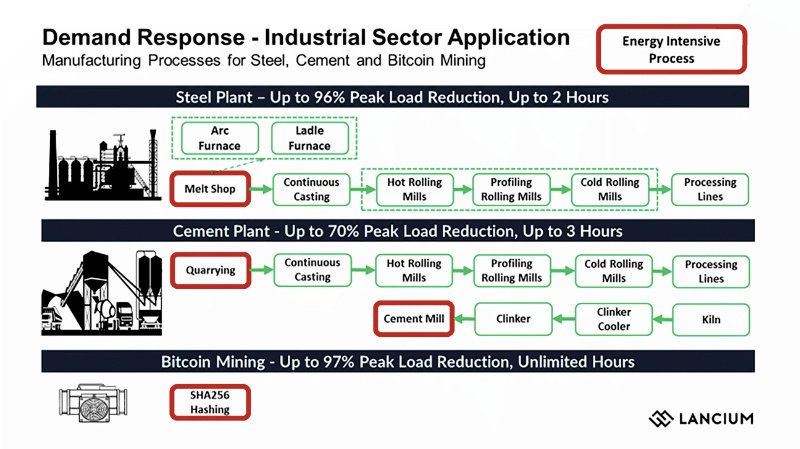 The video below covers it pretty well.

But for Albania, as they develop their existing energy projects if they work with bitcoin mining companies the miners can have agreements to turn off whenever the normal demand is high.

Instead of having an oil plant to fulfill 1% of demand in winter times, there’s 1% of electrical demand that can just be turned off during peak demand.

Why The Government and Bitcoin Miners Need to Work Together

Bitcoin mining residentially was a problem for a short while in 2021 when the profit from mining was very very high. Similarly people stealing electricity to mine bitcoin has been an issue in Albania.

Due to both of these things Bitcoin Miners have a bad name in the region as they’re working against the electricity system instead of with them.

But if you look past the few bad apples, bitcoin mining and the government of Albania both want the same thing.

Albania wants to develop more energy and lower the price of electricity for its citizens.

Bitcoin miners want to use (and pay for) Albania’s wasted and stranded energy and help stabilize the grid in the process.

So what should be the next steps from both sides of this dynamic?

Well for starters, I believe the Albania government should create a regulatory framework that allow bitcoin mining companies and individuals to work legally together with the electrical companies to make use of energy behind the meter.

Doing both of the above would send a message to the Bitcoin miners that Albania wants to work with them. Do that and Bitcoiners take care of the rest.

Albania has shown themselves to be very tech and business friendly, whether it’s simplified the process of opening and running a business or digital nomad visas (the most straightforward one in the world). I do think Bitcoin and especially Bitcoin mining can be the next step to help Albania.

As El Salvador showed, if you provide a safe framework Bitcoin companies will come into your country, invest it in and create local jobs and since Bitcoin mining is physical it creates well paying infrastructure jobs that also improves the infrastructure of the country in the process.

Credit to @level39 for an amazing thread that helped me write this and for the images. Thanks to Arnold (@st4rnold) for helping me with an early draft.

About the Author: I’ve been to Albania 5 times over the past 5 years, travelled the whole country multiple times. I advise a few companies in the Bitcoin space and helped started the largest Bitcoin Education Non-profit in El Salvador MiPrimerBitcoin which offer free classes to school kids, teachers, parents, and the surrounding communities.